"For the record, I think this is a terrible idea," advises Owen Grady, Chris Pratt's character in Jurassic World.

You might call the ride the apex predator of coasters—it's the tallest and fastest coaster in Florida. Feel the high-speed rush as the velociraptors race alongside you. Or, are they chasing you?

What's a Universal ride without a little movie magic? The line to the coaster is filled with surprises, and you're immersed in the story from the very beginning.

The premise of the ride is that you're no longer a guest at Universal Islands of Adventure, but you are actually in Jurassic World. The ride you are about to embark on was created for the doomed theme park featured in the Jurassic franchise. The raptors were intentionally set free and will run alongside the coaster. What could go wrong?

During the ride queue, characters from the World movies are involved. Original content was created exclusively for the ride. The film's original cast—Chris Pratt, Bryce Dallas Howard and BD Wong—reprise their roles as Owen Grady, Claire Dearing and Dr. Henry Wu. True to their characters in the blockbuster films, Claire and Dr. Wu convey their enthusiasm in bringing guests within close proximity of Velociraptors as part of the coaster, while Owen believes otherwise.

As you enter the stables, you'll smell wet dirt and vegetation from the nearby raptor paddock. You'll come face-to-face with two full-grown velociraptors, close enough to feel and smell their breath. You'll catch a glimpse of the coaster and other riders whizzing by at 70 MPH, building the anticipation. 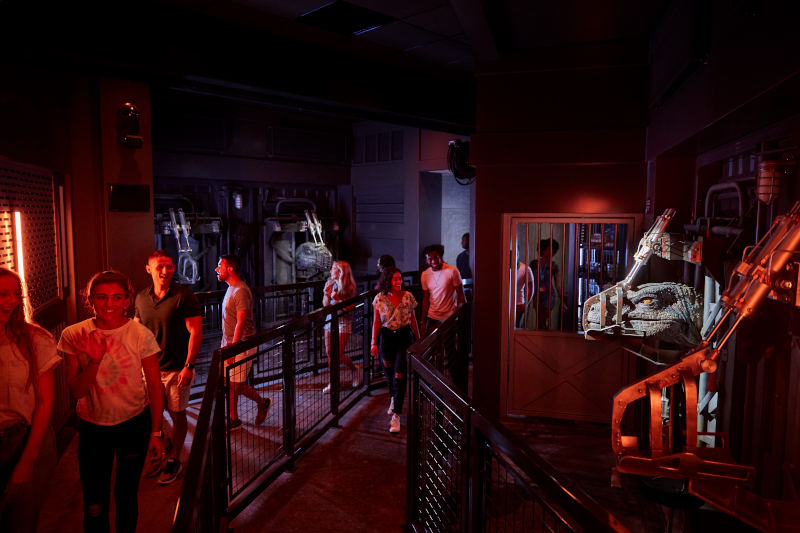 As you are seated on the ride, you'll first notice there's only a lap bar securing you. You're probably familiar with the over-the-shoulder harness used in many other coasters, but it's noticeably absent here. Coaster enthusiasts like not having the harness; they say they get a higher quality experience without feeling like they are stapled into a seat. The ride builds slowly as you move through the raptor paddock. Once the raptors are released, you're catapulted forward in the first launch, going from 0 to 50 mph in three seconds.

The second half of the ride actually gets faster, with the second launch taking you from 40 to 70 mph in 2.4 seconds. There's a "top hat" that rockets you 155 feet in the air and then immediately drops you into an 80-degree plummet. A major highlight is the 360-degree horizontal barrel roll just inches above the lagoon in the center of Universal's Islands of Adventure.

VelociCoaster is located in the Jurassic Park section of Islands of Adventure. Nearby rides include the Jurassic Park River Adventure water ride. One minute, you're gliding along in your raft, the next, you're face to face with a giant T. rex. Your only escape is a pitch-black 85-foot plunge into the unknown. For a more kid-friendly ride, there's Pteranodon Flyers, where you can slowly soar through the air beneath the 10-foot wings of a Pteranodon.

If you have an appetite after all those twists, turns and drops, there are a few new food offerings that stay right on theme. The Dig In jar has alternating layers of chocolate cake and mouse and tiny candy bones. There's tropical-themed tiki cocktails and even a specialty soda from Coca-Cola called Island Nectar Refresher that has hints of mango and papaya. Remember the mosquito trapped in amber from the movie? There's an edible mosquito gummy version to try as well. 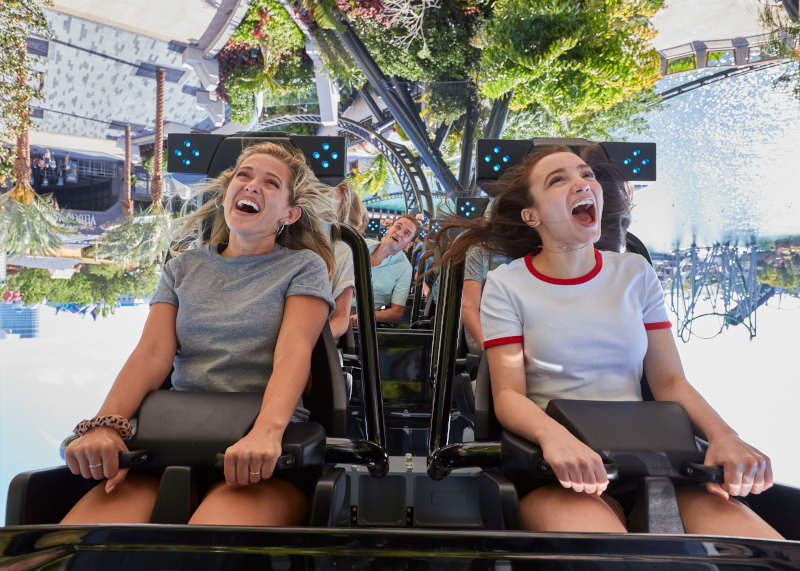 The reviews are in and it's a hit! Here's what people are saying.

"Like the movies it is based on, it is a pulse-pounding attack on the senses." Tampa Bay Times

"Our expectations were high—as in, 155-foot top-hat high —and, somehow, they were still exceeded by the ferociously fast launches and unreal amounts of airtime we experienced. It's safe to say we felt the rush of the hunt... and then some!" Orlando Informer

"The VelociCoaster is the ride that the Jurassic Park franchise deserves. It's the kind of experience that emulates the thrills of the movies, and it is instantly one of the essential, must-ride attractions at Universal." Thrillist

Ways to Save on Universal Orlando Resort Admission