Disney fans have been eagerly anticipating more news on the previously announced Disney Genie service, and we now have the details that everyone has been waiting for. The new service is set to launch on October 19 at Walt Disney World® Resort and will follow at a later date at Disneyland® Resort. This is a big change for Disney parks, replacing FastPass and other services that Disney guests are familiar with, so read up! 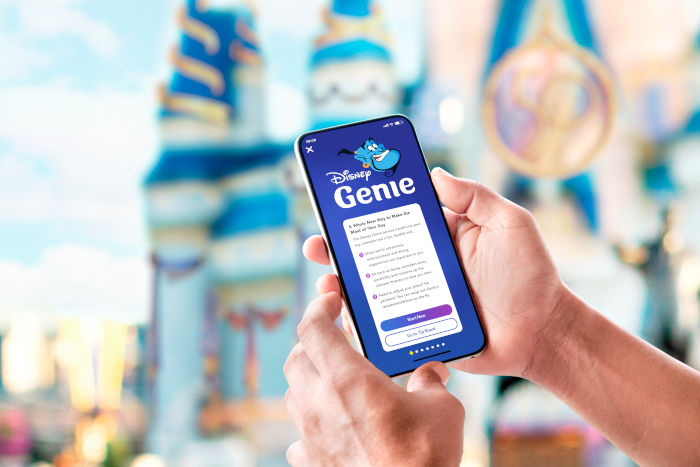 So, what is it and how does it work?

In short, Disney Genie is a new digital service designed to create your best Disney day. While there are a number of core complimentary features, guests can also choose to purchase additional features—including the new Lightning Lane entrance.

With many years of knowledge and expertise in how guests visit the parks, Disney has created Genie to help you experience the parks as YOU want to experience them, and as efficiently as possible. Tell Genie what you want to do, and it will do the planning for you.

One of Genie's top features is the personalized itinerary it will create for you, with suggestions based on YOUR preferences. Select the attractions that interest you, and Genie will make a plan for you. Genie will update and adjust your itinerary throughout the day based on your activities, prioritizing ways to reduce wait times and building around your existing plans like dinner reservations. It will take into account the most up-to-date information on attraction wait times, Lightning Lane return times, attraction closures, dining times, mobile order pick-up windows, and more. Because it will update as you go through your day, you're not locked into anything—you still have the flexibility to be spontaneous and go with the flow. You'll find all of this in the "My Day" tab.

Genie will help you create personal tip boards, one for dining and one for experiences. You can find these in the "Your Tip Board" tab. Your tip boards will display current and forecasted future wait times, so you can plan around those. You can also join virtual queues at certain attractions, make dining and experience reservations, place mobile food orders, get help from a virtual assistant, and more.

With this launch, Disney is also introducing Genie+, which gives guests access to the new Lightning Lane entrance. For $15 per day per ticket at Walt Disney World® Resort (and $20 per day at Disneyland® Resort when it becomes available), you can choose the next available time to arrive at a variety of attractions and experiences. You can make one selection at a time throughout the day of your visit, starting at 7am. Lightning Lane selections can be used across multiple parks for those with Park Hopper® Tickets. One big difference from MaxPass and FastPass to keep in mind: you can only book each ride once per day. At launch, Lightning Lane is available for a wide variety of attractions, including classics, thrill rides and newer favorites at all four parks.

Disney Genie+ will also include Disney parks-themed audio experiences and photo features, including augmented reality photo lenses, to capture your memories. At Disneyland, Genie+ will include PhotoPass, but it does not at Disney World.

Note that kids ages 2 and under don't need to purchase Genie+ and will be grouped with their adult party.

Note that attractions will continue to offer a traditional standby queues and virtual queues (at certain attractions), so guests who don't wish to purchase Genie+ or individual Lightning Lane selections can still access their favorite attractions.

How do you get Genie+ and/or individual Lightning Lane selections?

If you're planning ahead and know that you want to purchase Genie+, you can get it as an add-on to your tickets. Walt Disney World® Resort tickets including Genie+ will be available for purchase soon from Orlando CityPASS, while Disneyland® Resort tickets with Genie+ should be coming soon from Southern California CityPASS.

You can also purchase Genie+ on the day of your visit through the My Disney Experience app or the Disneyland app.

Individual Lightning Lane selections can be purchased for up to 2 different attractions per day on the same day of your visit through the My Disney Experience or Disneyland Apps.

There is likely more info to come in the coming weeks, such as pricing for individual Lightning Lane selections and a launch date for Genie at Disneyland® Resort, so stay tuned... we'll update this article as we learn more.